In a working-class suburb of Auckland, New Zealand, in 1957, eight mildly rebellious schoolboys, inevitably obsessed with sex, were attracted to the arrogant and thoroughly delinquent little Mickey Rooney whose fantastic dreams of Hollywood fame were to be his downfall.

It wasn’t a real gang, and it didn’t last long. It disintegrated after an obscene practical joke played by Mickey on the gang’s most vulnerable member.

The book then follows the boys into manhood. Nine men. Nine lives involving love and romance, sadness and joy, success and failure, illness and death, drugs and vice, violence and crime, and murder.

Nine men with nothing in common but the teenage year they wasted in Mickey Rooney’s gang.

But beware. As one reader put it: ‘It’s not for the faint-hearted’. 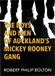 ‘Bolton’s new book lifts the dark lid off Auckland’s
past in a brilliant, clever read. Loved it.’

Buy Now
To The White Gate The Fine Art of Kindness My Marian Year The Boys and Men of Auckland's Mickey Rooney Gang Jacko. One Bloke. One Year. The Tapu Garden of Eden The Boltons of The Little Boltons Six Murders? Underneath The Arclight The Short Stories For Viktor
Photos